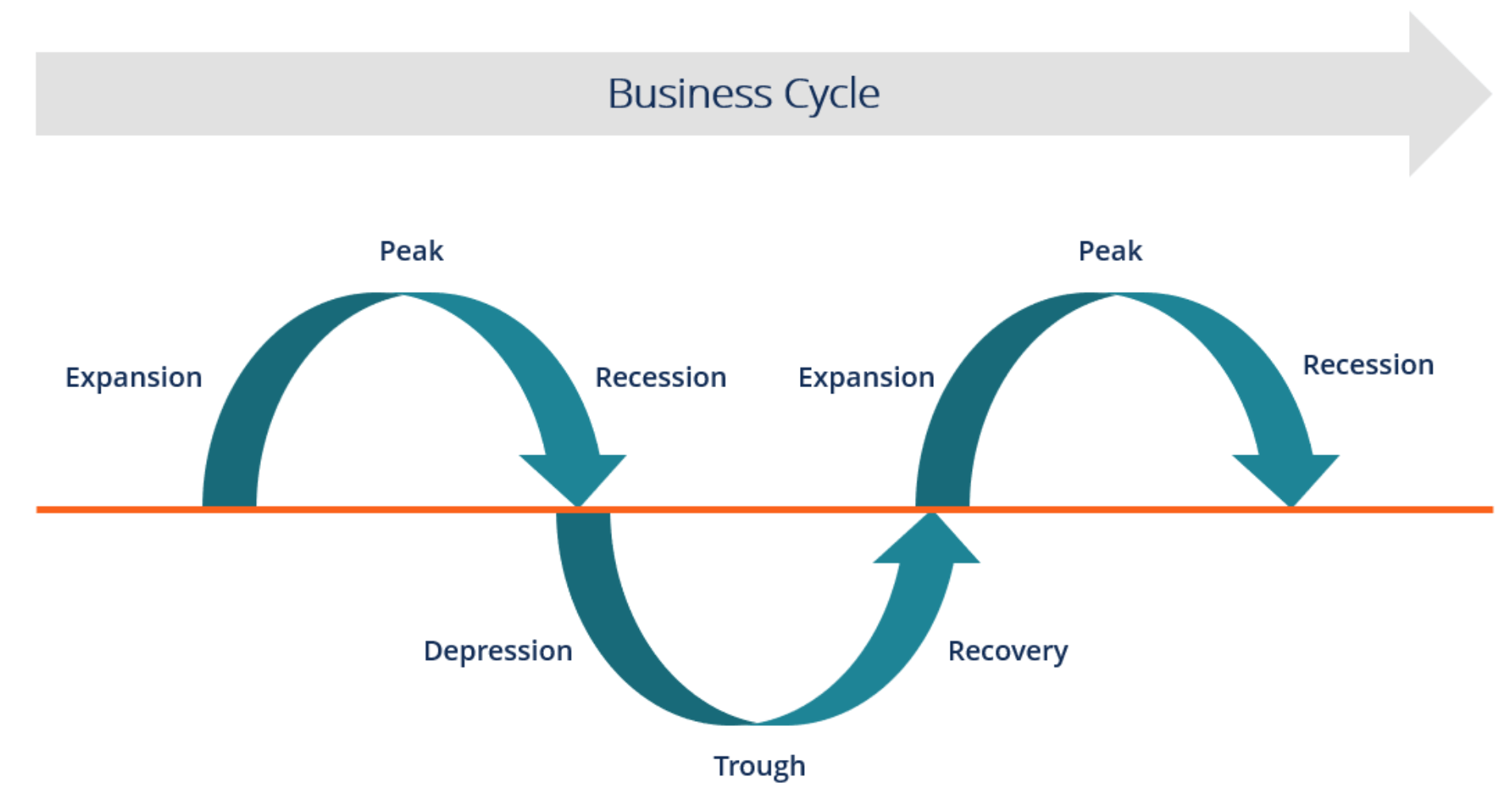 Business cycles occur when the economy is experiencing increases in economic activity, followed by a recession. These cycles will occur time and again but they differ in size and duration. They root themselves in countries that rely on business enterprises. Some characteristics are common amongst these cycles, which are taking place in a broader economy rather than specific sectors. Although they share some common features, they are not the same, but they give us historical data that can be utilized when making future investment decisions.

Although as the economy moves from growth to recession some of the conditions stated may play out with a lag. For example, during an uptrend households may decide to save more and consume less, which will not support growth, although as time goes there will be some normalization. If the policies were made to be accommodative during a crisis, the policies will be normalized as the crisis is coming to end.

During a contraction, investors will invest in safe havens such as treasury notes or companies with gradual growth. This indicates that these instruments will experience an increase in prices and will provide people with income as the unemployment in the economy is at high levels. When investors start to extrapolate that a recession is coming to an end, they will increase their tolerance for riskier assets. The equity markets will be experiencing a rise in prices before the growth becomes evident in the real economy. This clearly shows that the equity markets can be an indicator of where the economy is heading.

After the economy has experienced an expansionary phase, it will be followed by what is regarded as a «boom». A boom is when the market prices are overvalued and they are going beyond their fair value. In these cases, businesses will be having trouble finding qualified workers due to excessive expansion and will start increasing the wages of qualified workers to attract them. This will result in a decrease in profits. Other companies will start to issue more debt due to a belief that the economy will be on an upward trajectory in the foreseeable future.

With the capital that is obtained from issuing more debt, they will use it to increase their production. These actions will have a huge erosion on profit, which will require the government to precautionary measures. With the increase in salaries, the central bank might be concerned about inflation. During the boom period more money will start flowing to riskier assets and those safe havens might experience an outflow of funds.

When the business cycle reaches a peak, that is when we can conclude that the boom period is ending. After the boom period, a contraction will start to take place. The downtrend will be caused by factors such as policies, credit crisis, or energy prices. During the downtown, jobs will be lost and output and production will decline. The type of assets that will be affected by a cry will depend on what caused the crisis. For instance, during a pandemic, the equity markets saw a decline in prices, and the treasury notes saw an increase in their prices. History has shown us that recessions tend to last for a shorter time than the expansionary phase.

In the upcoming section, we will be discussing theories of business schools, starting with neoclassical economics. Neoclassical analysts pride themselves on the concept of general equilibrium. The basis of this theory is that markets will reach equilibrium due to the free market. Practically this kind of theorist believes free markets will transfer factors of production to produce goods that are in demand. Although it does not consider the fluctuations present in the economy.

They have a believe that if the economy experiences a shock that impacts the demand or the supply curve, it will be corrected by lower interest rates and lower paychecks. Neoclassical economists are rooted in a law called «say's law». This law states that all the products will be sold due to supply creating its demand. When workers provide labor for the production of goods, they will get compensation in a form of wages. This will able them to purchase what they desire, by doing so, they will be creating demand. In this school of thought, a crisis, like the great depression, which consists of excessive unemployment is deemed impossible. Therefore, in this regard, the theory is ineffective.

This resulted in economists seeking to come up with more updated theories. This brings us to another school of thought called Austrian. This theory puts importance on factors such as money and government, which are regarded as insignificant by neoclassical economists. In neoclassical theory, the government's function is just to uphold the law and exercise border control and the market have their mechanism to take care of itself. Austrian theorists believe that output, production, and jobs are increased by government intervention.

Governments adopt expansionary models; this causes businesses to take part in investment projects. When companies have accumulated resources and assets, they will withdraw from investing, thus resulting in a crisis. For the equilibrium to be reached prices and salaries will need to be lower. This is the reason Austrian economists put much importance on governments interventions.

John Maynard Keynes is an economist who came up with the Keynesian theory. Keynes believed that if wages and prices are cut during a downtrend, there will be minimized spending by customers, which can exacerbate the crisis. Thus, Keynes proposed government intervention through fiscal policy. Fiscal policy is when the government

Influences spending and taxes. He believed that for a country to survive a recession, it must sacrifice its fiscal balance and be in a deficit. This will cause the government to be in more debt.

The monetary school disagrees with Keynes on some points. First, they argued that Keynes's theory does not consider the significance of money supply. With a rapid increase in the supply of money, there will be instability and if the money supply is very slow the economy will experience a downturn. Secondly, they argue that Keynes's theory does not work for a longer timeframe but is more suitable for shorter timeframe usage. They also argued that the economic policies implemented may take effect with a lag, thus it won't be effective in helping the economy to recover

The classical theorists advocate that there should be transparency in monetary and fiscal policy actions. They also propose that the money supply should be increased gradually. These theories are not guaranteed to work all the time but are very powerful when applied with understanding. It is very crucial to know more theories that are available in this article, as they are used by economists to make their investment decisions. Thanks for reading.

If the policies were made to be accommodative during a crisis, the policies will be normalized as the crisis is coming to end
tags