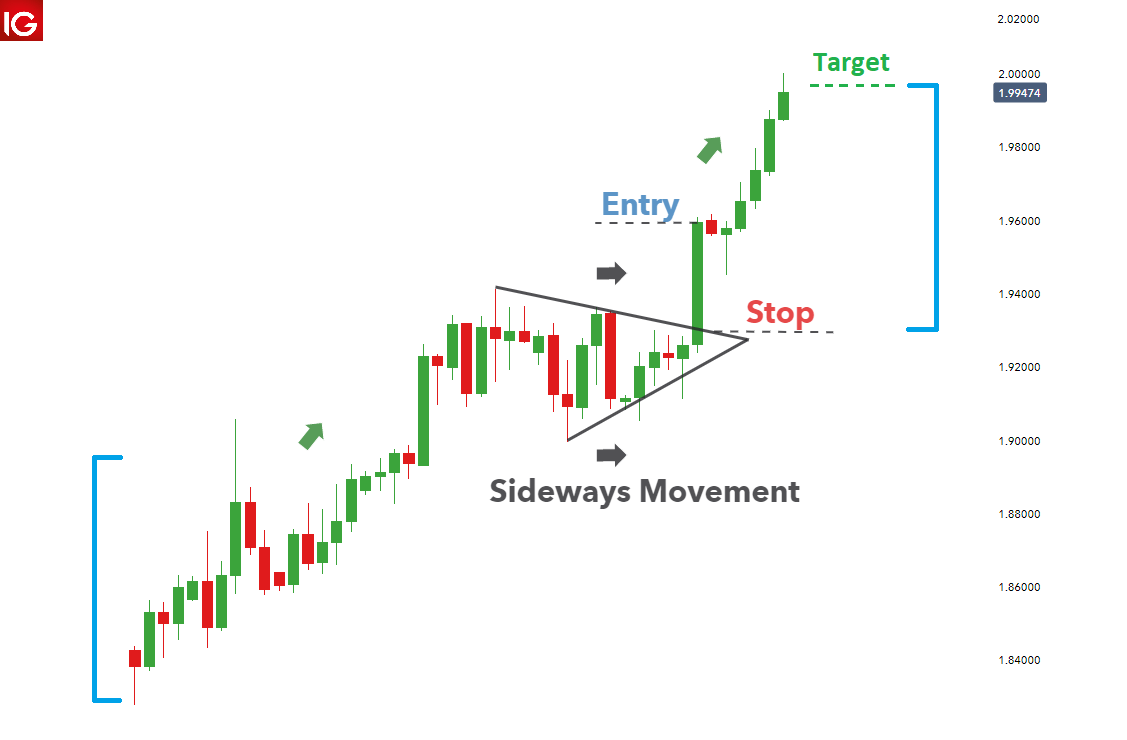 Forex charting analysis is a simple, intuitive analytical method that enables traders to trade and make good profits using fairly simple formations. Technical analysis includes more than 10 chart patterns. This article will focus on the pennant - a pattern that is part of the group of continuation patterns in the currency markets. The pennant can be actively used to enter in the direction of the formed trend (at the end of the correction). The pennant pattern is a technical trend continuation pattern. Visually, the figure is a descent with a small triangle (rather distorted, or symmetrical), the formation of which is carried out after a sharp impulse movement.

A trader can observe this on forex charts. By itself, the formation indicates to the players that the current trend is continuing. The main and most important condition is the convergence of the triangle lines. The pattern, however, should be directed in the direction opposite to the direction of the main trend movement.

Concepts for the formation of a continuation pennant pattern in the classical tech analysis of foreign exchange markets: 1) a sharp mid-term movement of the trend; 2) correction period - the formation of 3-6 waves of the model; 3) the resistance level plays the role of the upper border of the pattern; 4) the support line acts as the lower boundary of the formation. The lines converge, and the climax is near, and, accordingly, the tension on the stock exchange only increases.

The breakdown of resistance (or support) is followed by a sharp price movement, in the same way as before the structure of the pennant. Please note that pennants are sometimes formed at the top of the trend, below important price levels. Such patterns are likely to be counter-trend in nature: in this situation, the shape of the models should be directed towards the main trend. By itself, a pennant pattern (if viewed from the point of view of technical analytics) does not guarantee (absolutely and one hundred percent) that the market will continue to move. In Forex, it happened that the figures just broke through, and the price, in turn, made a reversal and turned in the opposite direction. At the moment when the pennant has already begun to form in the forex market, about half of the trend movement has already been left behind. Some influential traders start fixing income, and the rest - those who neglected to set a stop order (stop loss) and traded against the market, now suffer losses and are forced to close in order not to lose even more. As for the pennant, its classic version implies a five-wave pattern - a figure in which the period of formation of each of the waves is reduced. But in reality, the first wave is created from several candles, for example, it is caused by unexpected news or an unpredictable event. Also, consider the volumes (within the boundaries of the formation).

For example, if bearish is present, then the volume should rise when the chart moves down and fall when the triangle is being created. An increase in volumes when the boundaries are broken indicates that large investors are determined to continue the trend. The pennant pattern is usually traded on higher timeframes - from H1 and higher. To designate a pattern on a currency pair chart, players use a standard tool - a tren line or a triangle shape.

An important stage associated with preparing for placing orders, it is more rational to start on the 3-4th wave of the figure, or after the formation of 50% of the triangle. According to all the canons of those. analysts, a breakdown occurs precisely during this period of the formation of the model. As for the tactics of entering the market, there are several ways. The first option is rather conservative: for this, experts advise to open a deal after the breakout: you need to wait for the support (or resistance) retest.

A true breakout does not happen often: the breakout has a sharp character and the volume tends to rise. A more unsafe method - the entry is made after the candle closes outside the pennant on the H1 or H4 time frame. Such a risky option involves conducting an operation in the direction of the main trend at the beginning of an upward wave before the breakout of support (or resistance). Take into account the recommendations, and of course, do not forget about placing orders - stop loss and take profit (by the pennant).

Graphical models in technical analysis are used on almost all instruments of the foreign exchange market. The pennant shows this well: this figure is very simple and easy to understand, but at the same time it is extremely effective in trading.

Use ideal formations when working with it, and trading will bring you results.