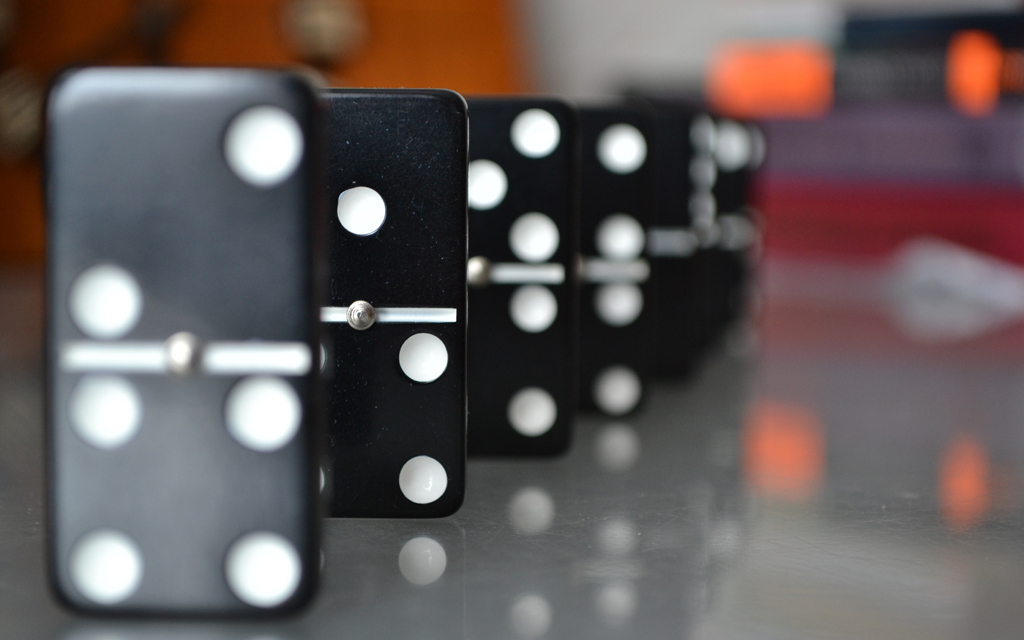 The domino effect is a chain reaction - a process where a change in one link in a chain provokes a series of similar changes in another - a neighboring element, and so on. If we talk about the forex market, then it is worth analyzing the connections between currency pairs: they are all closely related to each other, and, as a rule, are in a correlation movement. Therefore, if we consider a certain group of currency pairs, then at a particular moment in time, you can see that one or even two pairs will start to move, while the others will stay away, and only after a while do they begin their movement, following those pairs that are already are active. Leading pairs mark the beginning - the start of a chain reaction. And from this, it is logical to assume that in the forex market there are both dominant and those pairs that are lagging, but they always transfer the right of the leading role to each other. Of course, it is quite difficult for most novice players in the foreign exchange market to understand the meaning of this effect, knowledge is important here and to find these patterns on the charts. In reality, chain reactions in Forex occur almost every week, and many experienced players can even make good money on this. Of course, this is not the basis for the system, but it is a very good trading element, especially for a beginner who aspires to become a professional. Reflecting on the topic of chain reactions of the market and the domino effect that is present on the stock exchange, any player asks the question - what are the reasons for such a discrepancy, if the main postulate of technical analysis tells us that the price already takes into account everything? Indeed, based on the efficient market theory, all important data, immediately and in a full-fledged format, we can observe precisely on market quotes. The forex market reacts instantly due to the high level of daily activity. But one way or another, the domino effect arises: it is present because each of the currency pairs has its levels - the levels of support and resistance, each of the pairs has its news schedule and other characteristic features, which gives it a share of individuality. To look at this from the point of view of practice, let us recall an example, when at night, for some of the pairs, news comes out, and therefore it breaks out a level, an important level, while other instruments - correlated pairs already in the daytime on dollar events follow her, making a breakthrough. In other words, when there is destabilization in the market and an imbalance begins in the market (this concerns the movements of pairs), then the market itself tries to eliminate it. To a certain extent, the chain reaction of the market resembles arbitrage trading operations, the only difference is that there are no mathematical calculations or specific formulas in the domino effect, everything here is assessed rather «by eye» - at the level of perception. But still, why do most of the players just not notice it? The thing is that many forex traders are simply conservatives: they are simply stuck on one instrument, well, two currency pairs at the most. To conduct their analysis, they tend to use rather low-performing indicators that do not provide useful information. Therefore, they will not see the domino effect on the Forex exchange, even if they open the necessary charts and try to understand the meaning, but unfortunately, nothing can be traced behind a thick layer of ineffective oscillators. That is, to understand and deal with the domino effect, you need to invest a lot of time and effort in analytics - to perform a detailed analysis of currency pairs at different time intervals. For a detailed understanding, consider the following examples.

1. meaningful levels, For example, a two-day level appeared on dollar instruments. In the role of the first link - dominoes, you can call such a pair AUD / USD. This pair breaks this level at night at the Techocean session. And then, the British pound is connected to the trade. updating at least two days. On the same day, another pair comes into play - USD / JPY, which closes the series, updating the two-day high at the same time.

2. Situation two: strength or weakness. If you take pairs where there is one currency, you can very easily identify those that are lagging. For example, some pairs, where the yen is present, are decreasing in turn, each in its specific session. The strong yen will be the leading link in the movement. And by the way, the main pair USD / JPY did not show a decline, but, on the contrary, increased. But, a day later, the market eliminated such a discrepancy - all yen pairs began to decline further, in dollar/yen they showed a twofold fall.

3.Correlation of leading pairs Analyzing the 7 main pairs of the market (all those that are quoted against the dollar), you can find the following pattern: one of the pairs begins to rise noticeably and pulls the following assets with it. For a trader, in this case, it is important to find out in time which pair will be lagging and make the most of it. The probability of receiving income is directly proportional to the level of correlation with which the lagging pair belongs to the other remaining ones. Even though the Forex exchange stands out for its high liquidity, it can reveal a significant imbalance in the dynamics of currency pairs. And the main goal of the player is to extract the maximum profit from this.

Reflecting on the topic of chain reactions of the market and the domino effect that is present on the stock exchange, any player asks the question - what are the reasons for such a discrepancy, if the main postulate of technical analysis tells us that the price already takes into account everything?
tags