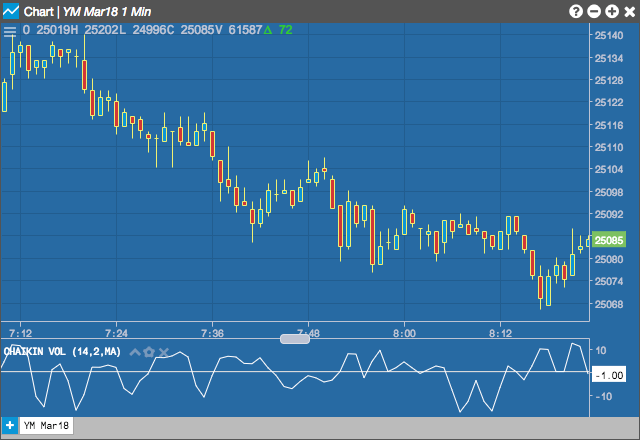 The main objective of this analytical tool is to significantly improve the efficiency of trading. This is somehow useful for any market participant. aimed at success.

The Chaikin Oscillator can be classified as a hybrid market indicator. The tool is based on MA (moving averages).

In turn, removals are calculated using another important tool - the accumulation / distribution indicator.

It was thanks to the development of professionals, their knowledge and analytical mindset that Chaikin was able to develop a very effective and profitable tool that repeatedly proves its effectiveness in practice.

This Chaikin oscillator is the standard MACD, only used to the accumulation / distribution indicator.

It calculates the difference between two SMA (simple moving averages) of the accumulation / distribution indicator, the first of which is a three-day indicator, and the second is a ten-day indicator.

If we talk about the formula by which we can calculate the values ​​of the indicator presented, it is as follows:

It is also worth noting that Chaikin's oscillator is positioned (and viewed) as an indicator relative to another indicator. It determines the moments of the A / D line.

It is with the help of such a factor that it is removed minimally by three steps from the currency quotation (the base instrument), each of which is represented as follows:

-price and the volume of trades goes to Accumulation / Distribution;

- the above straight line is smoothed (this is affected by the EMA - Exponential Moving Average);

All of the above allows us to state that the Chaikin oscillator has some relationship with the quotation of the base currency.

Also, this technical tool makes it possible to change the level of pressure that both sides of the driving force of the market - buyers and sellers - have on the market.

If we see the positive data shown by the oscillator, then the bull is dominant in the exchange, and if Chaikin's indicators are negative, then bears predominate.

Also, with the appearance of a divergence - a discrepancy, the trader can receive additional alerts.

The main points for creating the indicator, which were applied during the analysis by Mark Chaykin:

1) the average interval of quotations of a currency pair is calculated based on the sum of two price values ​​for the trade gap - the maximum and minimum with a further division of the total by two (the arithmetic mean);

2) in a situation where the quotes of the financial instrument of interest to us are above the average quotation interval, we can safely talk about the fact that buyers have taken positions, consolidated their forces, and this provokes a price increase.

The closer the closing value of the asset to the maximum value of the trading interval, the higher the intensity of the increase in purchases;

3) The reverse is indicated by the situation where the quotation is below the average interval.

Given this state of affairs, investors focus on dispersing the asset - and selling.

We can draw the following conclusions: the closer the closing price of the asset (to the minimum parameter of the trading interval), the more distribution will be brighter;

4) between the increase in the asset and the magnitude of its volume, this dependence: the more the tool is increased, the greater the volume.

If the growth rate is low, and the trend brakes, then, in a short time, we will be able to observe the market correction (rollback) or its reversal.

Based on ongoing market research, analysis of tools, data and values, Chaikin was able to create such a means of technical analysis that allows us to identify and calculate the nature of price acceleration, and to determine it with quite high accuracy.

It is using the data oscillator. the trader can get the desired financial result in the trade.

About its use, the most common application is trading from the touch of the zero line with discrepancies.

Such a trade by a market participant implies the following:

1) the variant of bullish divergence is present only in those cases when the minimum value on quotation updates own data on the chart, and the minimum indicator of the oscillator is higher than the last one.

The trader receives a buy signal, which will be of a short-term nature.

2) before making a deal to buy, the player needs to wait for the confirmation signal about the acceleration of the course when the Chaikin oscillator touches the zero line (the direction is up).

This is positioned as a signal that tells us about the intersection of MA - one line, the faster, the other, which has a lower speed - to be produced from the bottom up.

3) bearish discrepancy is characterized by opposite conditions relative to the first point of factors.

It is present when updating the highest value of the price, while the maximum Chaikin parameter is located lower than the previous one.

Based on such data, we can conclude that it is worth selling.

It is worth emphasizing that this oscillator can be combined very successfully and effectively with indicators such as Overbought / Oversold.

These are the following tools:

Trade is recommended (or rather, you enter the market) on the trend.

The main advantages of the oscillator:

- The analytical tool allows you to determine the most favorable points for entering the exchange;

- combine work with other versions of tools, more classic;

no data is redrawing.

This tool, despite its too high flexibility, is considered one of the best hybrid solutions: it allows you to increase the profitability and efficiency of trading at times, especially if you combine it with other indicators.

It was thanks to the development of professionals, their knowledge and analytical mindset that Chaikin was able to develop a very effective and profitable tool that repeatedly proves its effectiveness in practice.
tags