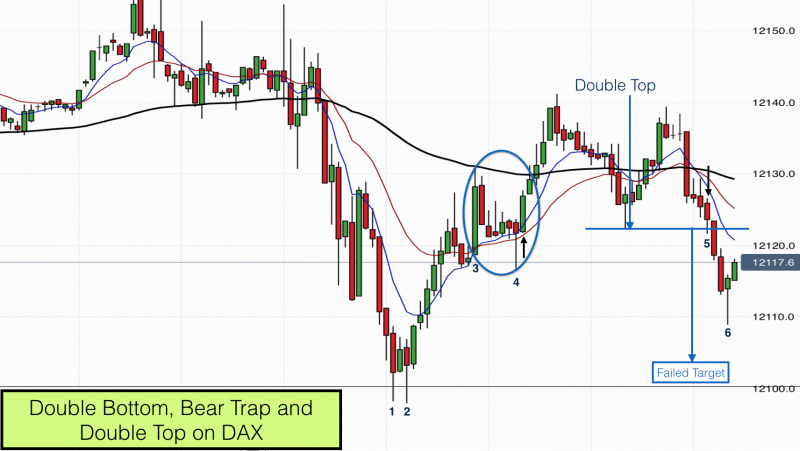 Important points when working with a pattern

This market pattern (double top / double one) can be found very often - both in literature and in other sources, but not all traders know how to work with it correctly.
The graphic formation Double top / double bottom is a frequent occurrence. By its nature, the pattern is the reversal, so a player needs to know how to enter the market when forming a formation, and how to correctly place orders (stop-loss) and designate goals.
1. What is this pattern?
A double bottom or double top is such a formation when the price approaches a certain level - values, forms a maximum, and then falls (a fixed time interval rushes down).
Further, it makes a return to its position (approximately to the same levels) and then draws the same peak at the same level as the previous one, followed by a turn and a decline.
This situation is typical for the double top.
If we have a double bottom, the cost goes up to certain values, then forms a minimum, and rushes for some time, and then makes a return to the starting position, then again turns, and already forms the second minimum.
And only after these processes the price growth starts.
This pattern is referred to as a double bottom, and the above is a double vertex.
Obviously, with a double top, the formation will have a reversal character and will affect the price movement, forcing it to rush down.
If we have a situation connected with a double bottom, then despite the reversal, the pattern will provoke a further price rise, because the price itself is directed upwards.
Consequently, the double bottom contributes to the reversal of the bearish trend, and the double top is already deployed by the bull.
2. Moments to which the player should pay attention
Suppose the situation is the following.
The trader has open deals on purchases, and he has discovered a double top, and therefore, made a decision on withdrawal.
How specifically can you determine whether a formation is qualitative? By what criteria?
First of all, it is worth paying attention to the levels of support or resistance: if at the level of a double bottom or a double peak there are these levels.
If such a level exists, and it is layered onto a double vertex, then this indicates that the pattern has even more power, and therefore it is significant.

Also, if there are (at least) six candles between the two peaks.
In other words, peaks should be at a distance from each other: visually it should look like 2 peaks or bottoms, and not a few bars that are next to each other.
But at the same time, do not forget that if the second peak is far from the first, then this format will not be a pattern, and it is more a coincidence, and therefore, we will not simply observe a strong trend reversal.
Probably the onset of correction, but not reversal: this follows: the longer the distance of the first peak from the second, the higher the weakness of the pattern and its significance level as a graphic model is lost.
In case the vertices are equal, and the cost of the well is very close to the levels of the previous peak (or to the value of the previous bottom), then, as a rule, this is an imaginary pattern.
And talk about the importance of the movement does not have to (except that there will be a correction).
In other words, if there is an identity in the prices of the vertices (if the pattern is a double hollow or a double peak), then it is better not to enter this position.
For the player it is important to filter the transactions, selecting those whose second touch is lower than the past (for the double top), and for the double bottom, we use the reverse technique.
3. Entering the market
Considering the double bottom from the point of view of the reversal pattern, we can observe the creation of the first peak, then the creation of the second peak occurred and the price rushed upwards.
For the trader, there is an urgent question: when to enter (and enter at all), and where to set the stop loss and take the profit?
To correctly enter the position, we need to build a trend line, based on the previous trend, provided that the line should cover the maximum value - the extremum that was before the second bottom.
And then, we set the horizontal line at the level of our previous high, which was before the second depression.
Next, fix the length - the interval from the level of the two depressions to the last peak.
Log into the market should be made in case of breakdown (when the trend line breaks through).
If desired, or better, in principle, you can use pending orders.
Happy trading!

The graphic formation Double top / double bottom is a frequent occurrence. By its nature, the pattern is the reversal, so a player needs to know how to enter the market when forming a formation, and how to correctly place orders (stop-loss) and designate goals.
tags