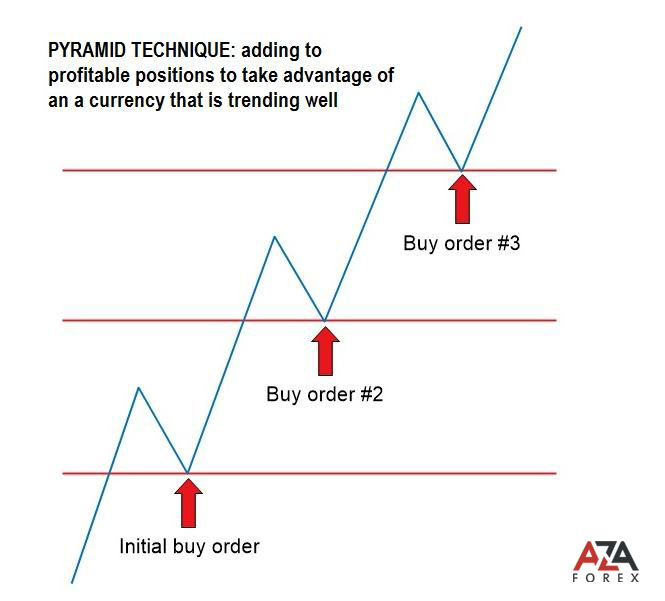 This is a popular and well-known tactic for many traders. The tactics of adding profitable positions are based on a gradual and systematic increase in volumes, on profitable trades. This positively affects the final financial result and the profit grows. Quite often it is possible to observe such a phenomenon: Opening the first position, the trader suddenly discovers that the trend is moving in the right direction. Earned profit is about a couple of dozen points and in general, nothing foreshadows a change in trend. If the trader did not miss the moment and after the first position, he opened the second, in the same direction, he successfully applied the addition of positions - he opened the second order in a similar direction and applied the tactics. The relative ease of such an addition has several nuances that must be taken into account. The tactic for adding positions on the forex market involves observing certain rules, the correct calculation of the value of the second-order, some nuances for saving profits at the first position. Also, it's worth carefully consider the entry point to the market, choosing the most favourable one, and do not forget about the control of the trend that already exists on the market. So, let's consider the most important moments of such trading tactics: 1. The second order should be opened only if the price for the first transaction is located in the safe breakeven zone, and the revenue on the order totals at least 10 points (if you trade short-term). The trend has already confidently taken its position: it is moving in a direction that is beneficial for us, and a turn shortly is simply ruled out. It is also necessary to consider the size of the commission: the spread on the second, open order should not be greater than the value of the profit received. If, for example, for the first transaction, the profit was $ 10, then when you open the second, the losses can not exceed $ 5. 2. Entry point As for the optimal place to enter, it is better to consider the trend and its possible pullbacks. Optimal to choose the beginning of the movement, towards the main trend, after the correction period. 3. Position Amount The value of the lot for adding a position is selected on the basis that all opening losses should not exceed half (50%) of the profitability of the first position. 4. Income fixation Before opening the second position, you need to fix the profit: move the stop order (stop-loss) to the breakeven zone, and then gently execute the profit fixation, taking into account the risk of kickbacks and their maximum value. Use stop orders when opening new positions, without forgetting about such an important moment. As for the number of new positions added, they can be increased by no more than two. That is, you can add up to two. This is due to time: for such a period the market may already change and a trend may reverse. In addition to the volatile nature of the exchange, too much accumulation of positions creates additional difficulties for the player, it becomes difficult for him to control the trade and manage a huge number of open orders. To maximize the process of trading, experts advise using an additional program, namely to install a special script in the terminal that closes all positions and allows instant closing of all orders simultaneously. Let's summarize and list the positive aspects of this strategy: - this tactic assumes an increase (increase) in the total volume of the position, depending on the price increase in the prospective direction; - there is no need to perform additional analysis of the market, we are opening new transactions already on an effective strategy, so it is not necessary to spend time and effort on additional trend research; - Since all new positions open towards profit, then the risks are reduced (if you open an entirely new transaction, choosing a pair or a timeframe). Also, analyze your opportunities and trading experience. Sometimes it is better to add only one profitable position and close when the second transaction is already profitable so as not to miss the opportunity to earn. As you can see, tactics are relatively easy, but it also needs to be tested on a demo account. The beginner can safely use it, the main thing is not to risk all means at once, but to invest in parts. We wish you successful trading!

Opening the first position, the trader suddenly discovers that the trend is moving in the right direction.
tags