The participants of the Forex market 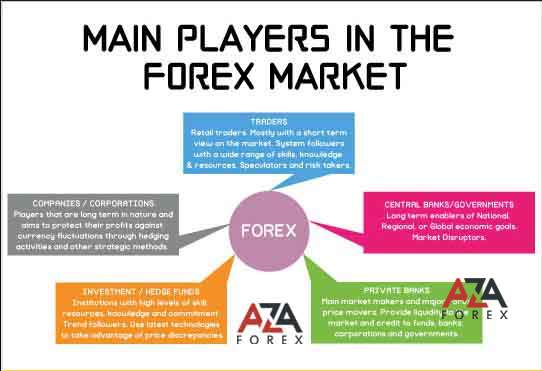 The participants of the foreign exchange market

Foreign currency trading is now a very dynamic business. The incredible numbers and scales are currency exchange for the multibillion-dollar amount of the foreign exchange market every day around the world. The foreign exchange market is so globalized that it already includes not only central banks but the largest investment companies, mutual funds, large hedge funds, and also ordinary forex brokers and forex traders.   A significant volume of foreign exchange transactions accounted for the interbank market where transactions take place through electronic transfers. A large share of foreign currency trading accounted for by such banks. Now banks act as the forex market operators for customers, which allows speculation on the trading floors. The bank's profit is the difference between the Ask and Bid.   Central banks are very important players in the Forex market. The policy of setting interest rates by central banks can greatly influence the exchange rates, which are traded in the open currency market. To stabilize or to increase the competitive ability of the country, the Central Bank may set different exchange rate regimes (floating, fixed exchange rate)   For speculators on the forex market can be ranked the private equity hedge funds that speculate in various assets and currency pairs using leverage. They carefully select the State problems using macroeconomic analysis, and make decisions about the opening of trading positions on the market, relying on its experience. Thanks to aggressive behaviour on the market and a large volume of such transactions, funds have a dynamic impact on the nature of the foreign exchange market operations worldwide. With the help of brokers, speculators and small investors may enter into transactions on the market, with the purpose to profit from speculation on changes in currency exchange rates. Such trades are held by traders on their equity. The mediators between the retail market and the interbank are forex brokers, traders, providing maintenance services and currency exchange operations, providers of the trading platform, through which players make profits in the forex market.