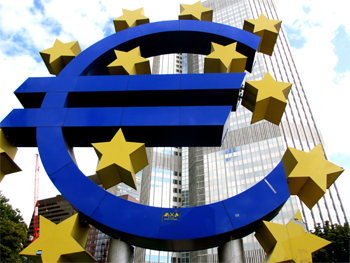 The ECB has embarked on a number of policies to try to ease financial conditions and encourage bank lending. Most recently the central bank announced in March that it would offer new loans to banks designed to encourage them to lend to firms and households. The firstof these is to be offered in June.

The ECB also launched a program to buy some corporate bonds. In separate comments Wednesday, ECB Governing Council memberArdo Hansson said that purchases of corporate bonds should be more effective at driving up weak inflation than its government bond purchases.

Mr. Hansson, who is also the governor of the Estonian central bank, said channeling money directly to enterprises is "going to be potentially much more powerful than channels that work indirectly through government bond markets."

Buying corporate bonds, Mr. Hansson said, will help avoid the concerns of moral hazard raised by government-bond purchases, whichcould encourage governments to delay reforms. "I've always been much more skeptical of the sovereign component of the programs," he said.

"The ECB will be fervently hoping that bank lending to businesses and households will be lifted as the substantial package of stimulativemeasures that it announced at its 10 March meeting are increasingly enacted and kick in," IHS economist Howard Archer said in aresearch note.

"While less effective than in the past, the ECB's stimulus is yielding results," said Berenberg chief economist Holger Schmieding in a note. "As the data for March probably reflect decisions mostly taken before the ECB unveiled its surprisingly broad new package on 10 March, we look for further modest gains in credit growth later this year," he added.

This offer is available to all clients and is valid for one new personal or corporate account opened before November 1, 2020.