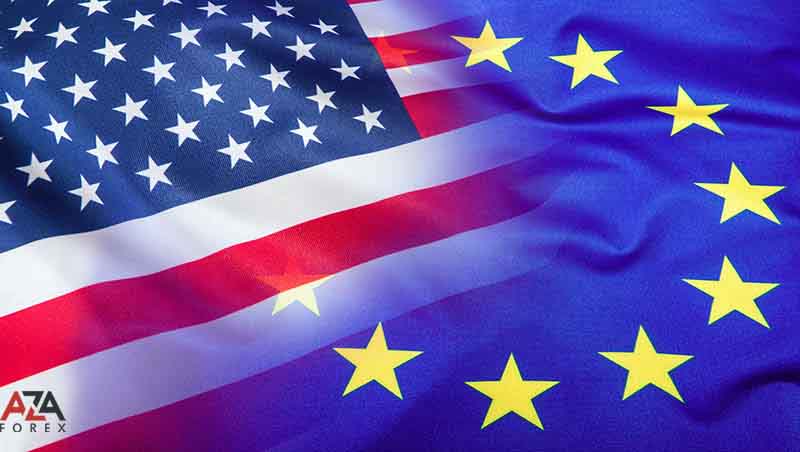 The currency pair Euro Dollar (EURUSD) is the most traded instrument of the Forex exchange. The pair falls around 30% of the total daily turnover. But the high popularity of this pair is easily explained: the US and the Eurozone are the most powerful world economies, strong and active world leaders who dictate the terms to other states and establish market rules. In addition to such a powerful influence, this tool is perfectly predictable, the pair's reaction to the main news or economic indicators from the US and the EU is fairly predictable. By the same token, events and news are published regularly and you can always be aware of changes in the economy or policies of these zones. Of course, the pair is highly active during the European and American trading sessions, and the level of volatility is at the mid-point. Also, consider the nuance that the EUR / USD pair has a reverse quote. As for the factors affecting the pair, there are many. Even, at least take into account the fact that the American currency acts as a reserve for most of the world's states. And the EU countries, in turn, include many countries, more than half of which, the Euro acts as the official currency, and each country in one way or another, affects this currency pair. For example, Greece. Its economic situation is not the best, but the peak has already passed (2009-2011), and for today, its economy rises due to tourism, even though many experts predicted the collapse of Greece, its exit from the eurozone and the collapse of the EU. But let's consider, in more detail, what fundamental indicators affect the EURUSD pair. The EU member states form the Eurozone. They (most of them) use the Euro as a national currency. Monetary policy is managed and regulated by the ECB - the European Central Bank, the main body of which is the Board of Governors. Concerning the principles of the ECB and its main objectives, the key objective is certainly the price balance. Among the main characteristics of the price policy of banks that affect stability, allocate the risk of price stability and the prospect of price events. Price stability takes place and should be maintained if the increase in the Harmonized Index of Consumer Prices is no more than 2%. To determine this parameter, you need to use a huge number of indicators and make a lot of predictions. But the main function of this index is the calculation of the medium-term threat, regarding price stability. Also, among the key parameters, the increase in the money supply is highlighted. 2. Interest rates To control the level of liquidity, the ECB refinancing rate is applied (an important short-term rate). Also, the difference between the US Fund rate and the refinancing rate of the bank is an excellent indicator for this currency pair. 3. 10-year government bonds This is another significant indicator for the Euro-Dollar exchange rate, this interest rate differential is important for the pair. From the EU, as a rule, are taken German 10-year securities - Bund. Reduction in the spread, in other words, an increase in the volume of German bonds or a decrease in the volume of American bonds, provokes the growth of the Euro / Dollar pair. Increasing the spread - lowers the exchange rate of a currency instrument. Also, a change in the difference in interest rates affects the change in the exchange rate of the dollar and euro. 4. Economic indicators German data on the economy - the most important in the EU, as Germany is one of the most large-scale economies in the Eurozone. Some of the most influential indicators are GNP, unemployment, inflation and industrial production data. Also, play a role and such a tool as an indicator of business activity - an overview of IFO. Well, do not forget about the data on the budget deficit, if we consider specific EU countries, its indicator should not be more than 3% of GNP. 5. Consider the impact of pairs that do not contain the US dollar That is the impact of cross rates on EUR / USD: it is affected by strong movements of pairs such as EUR / CHF or EUR / JPY. Euro the dollar may decline due to positive developments in the country of the Rising Sun. 6. Contract Euro futures (3-month) This is certainly one of the necessary tools for predicting the exchange rate of the pair. 7. Other indicators Consider the relationship between the Euro Dollar and the dollar pair Dollar and Swiss franc. It's all about the Swiss economy: it largely depends on the economy of the Eurozone. The decline in EUR/CHF most often indicates a fall in EUR/USD. 8. The importance of political factors Like any market instrument, this pair is subject to political change or political instability, chaos or other changes in the authorities of major powers of the EU. As it was mentioned above, a lot of factors influence the EUR/USD pair, but among them, it is necessary to allocate the strongest. For a successful and efficient trade on this instrument, traders should be aware of economic events in the EU and the US, own the political situation and take into account such aspects as the impact of news from other states.

Euro Dollar (EURUSD) is the most traded instrument of the Forex exchange. The pair falls around 30% of the total daily turnover.
tags